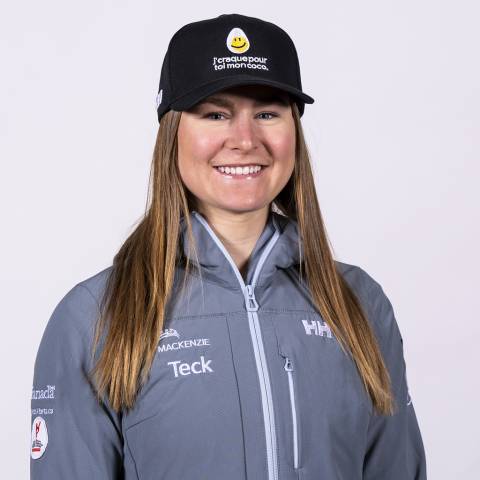 Valérie Grenier burst onto the international ski racing scene when she captured a bronze medal at the 2015 World Junior Championships. A few years later, at 21, she competed in her first Olympic Games at PyeongChang 2018, starting in the giant slalom, super-G, downhill, and alpine combined.

The native of St. Isidore, Ontario embraced the full World Cup circuit, racing in both tech and speed disciplines, capturing three top-30 results in the 2017-18 season, including a 15th place in the Alpine Combined in Lenzerheide, SUI, and has gone on to have multiple top-10 finishes since.

After injuries kept her out of the 2018-19 and 2019-20 seasons, “Val” returned to snow with a vengeance in 2020-21, skiing to four top-30 finishes, highlighted by a 13th place finish in Courchevel’s, FRA giant slalom. She carried on the success in 2021-22, catapulting herself from top-30 into the top-10 three times, with a personal best finish of 4th in giant slalom in Kranjska Gora, SLO just 0.08 seconds off the podium. She anticipates making her return to speed races in the 2022-23 season.

Valérie began skiing when she was two years old, immediately falling in love with the sport after trying on her brother’s gear. She first charged down a racecourse at the age of seven and has been hooked ever since. Despite setbacks, her commitment to returning to competition has been nothing short of impressive, as her dedication and passion to the sport remain unwavering.

Looking ahead to the future, Grenier is extremely excited for the idea of women’s FIS World Cup alpine races at her home hill of Mont-Tremblant in 2023 and beyond.